Fonts Do Not Matter 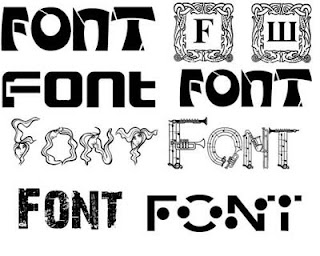 For technical writing? Well, that depends on the document. I have done extensive work on documents that used 12 point Times New Roman. Lots of text, lots of tables, lots of paragraphs with endnote notation. Not great to read, but it was exactly what the client wanted. I have done broader technical writing with blue headings (that's pretty much a standard when you're in Word these days on the Mac) and I've done some projects that didn't hinge upon the font that I selected.

Fonts are wonderful. I refuse to bash them. The more the merrier. The people who design successful fonts are really good at what they do.

Fonts are problematic in that you can really screw things up with the wrong font. And I'm not talking about the humorous (or deadly) backlash against Comic Sans. I'm talking about using an arcane, inflexible, difficult-to-read font on a dark background when people are trying to get at your website or at your document.

This is not the final say on the subject, but it does have that academic feel to it:

Print fonts and web fonts are distinguished by why they were created. While print fonts are designed for easy reading on paper, web fonts are designed to be easily read via a computer screen. Considering this, it would make sense that web fonts should be easier to read online than print fonts. However, the research suggests that this is not entirely true. While people might prefer the aesthetic value of web fonts, there does not appear to be a major difference in readability between the two types of fonts.

To test readability, the researchers had participants read eight different passages from a fixed distance as quickly and accurately as possible. They concluded that there was no difference between print and web fonts in terms of legibility and reading speed.

I'm sure there are font purists who would shudder at the idea that fonts don't matter. And I would tend to agree with them. Fonts matter, insofar as picking the wrong font, and the wrong colors, can kill your readership.

Think of this mishmash:

This is a testing of fonts and all that on this page for example purposes only.

And you'll see what I'm getting at. Grey on white, or colors on white, don't work as well as black lettering on a white background. The above example is too extreme, of course, but I wanted to show how a line can disappear and how selectively changing a font or a color can lead to an unintended move by a reader.

If you look at the reddish "fo" in fonts, your eye is almost trained to tell you that that could be--could be--a hyperlink. Did you hover over it? Anything reddish tells me that there might be an embedded hyperlink there.

For the web, I use Georgia. For print, I use Arial. This article, except where noted, is pretty much done in Georgia.

I almost never deviate from that formula. I know there are plenty of reasons to move to Times New Roman or to Verdana, but I keep things simple. I use Georgia and Arial, and I might--might--be persuaded to use something else for a title or something that is meant to look older or specifically designed.