Those Sorority Girls Are Harmless 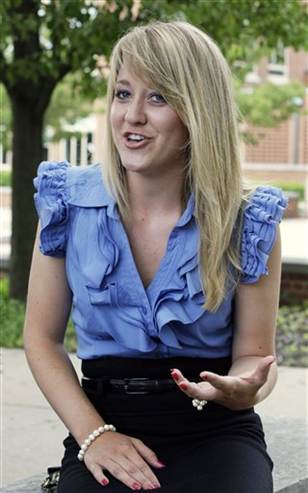 Some Poindexter is behind this nonsense--I can sense it:

Sorority spring formals call up visions of young women in colorful dresses dancing the night away — not vomiting on tables, urinating in sinks or having sex in closets.
The drunken shenanigans of three sororities at Miami University in southwest Ohio sound like something out of "Animal House" and were especially startling for a school that frequently makes the top 50 in a U.S News & World Report academic ranking but never makes lists of big-time party schools.
The school suspended two of the sororities and put the third on probation. A task force is reviewing discipline and education policies on student behavior and alcohol, and the campus group governing sororities says it will begin teaching new members to speak out when they witness bad behavior.
There is little evidence excessive alcohol consumption is any worse at Miami than other colleges, but students are worried the antics will damage the school's reputation.
"It's embarrassing," said Christina Zielke, 21, a senior from Cleveland, who doesn't belong to a sorority. "This kind of thing gives a bad name not just to the Greek system but to the university and students like me who aren't in the system."

Whatever, grandma.
The economy is to blame for all of this. The schools are full of young women (because of the young men had to either join the military or go to work full time in the mine) and they're bored. They're partying because they know that there aren't any jobs for graduates of state schools out there. Where a Yale or Harvard or Brown grad might be able to find a position with a reputable company, a graduate of Miami of Ohio is going to have to work retail until things sort themselves out. A lot of them are going to have to become strippers if they want to pay off their student loan debts (strippers never have money and never pay their bills, but they always have fifty pairs of thong underwear that they don't like anymore).
If I was attending a state school, I'd get drunk to relieve the stress of knowing there aren't any jobs, too. I'd love to see these girls party. I'll bet they do things that would make a sex tourist who frequents Thailand blush.
on July 04, 2010