Only Joe Mauer Can Save Baseball 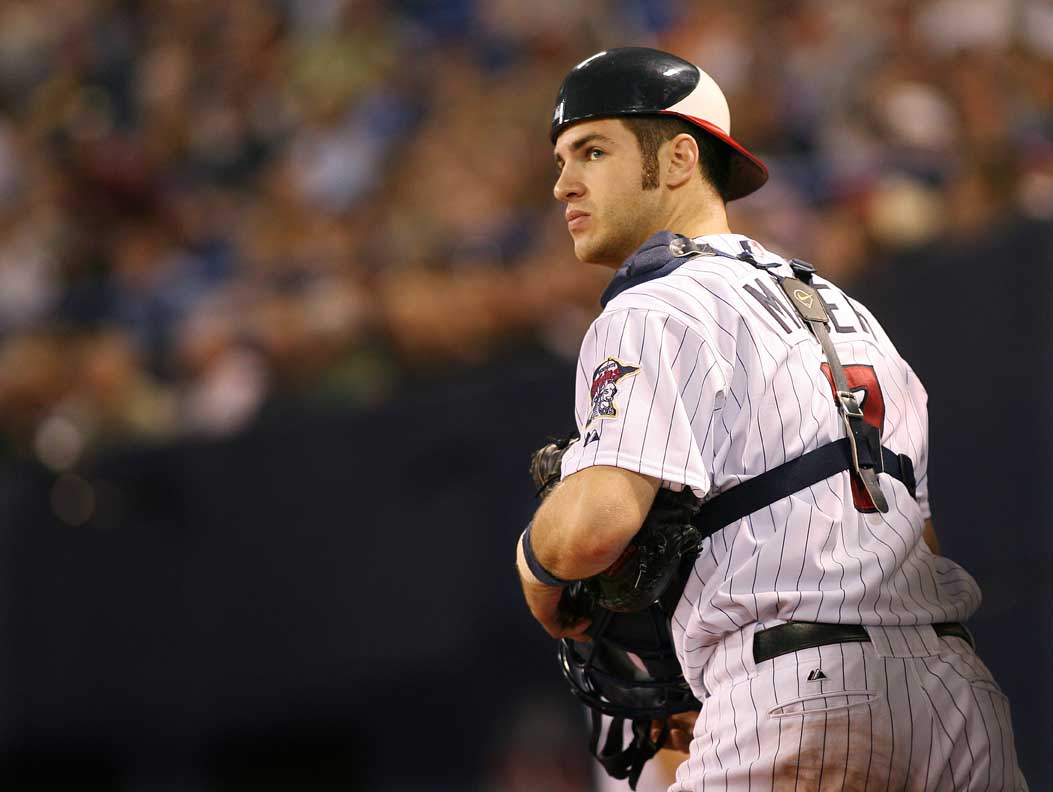 It's not like I want to put any pressure on the man, but if Joe Mauer were to take steroids, run over an old lady carrying birthday presents for orphans, or marry Amy Winehouse, it would destroy baseball.

The entire Sports Illustrated article about Mauer is masterfully written, but this chunk is as good as baseball writing gets:

Here's another measure of Mauer's excellence: the checked swing, typically the signal of defeat for a hitter in his one-on-one duel with the pitcher. Hitting is timing, the Hall of Fame pitcher Warren Spahn said, and pitching is disrupting that timing. The checked swing announces the hitter's surrender.

"Maybe five times in four years I've seen him take a checked swing," says bullpen coach Rick Stelmaszek, a Twins coach for 29 years. "I've seen it only once this year. He's a freak."

The secret to Mauer's success is his serenity, his minimalist movement and emotion. He is the Ben Hogan of hitters, bringing the sweet spot to the hitting area with no extraneous movement. "I think the biggest thing about my swing is I don't have a lot of stuff going on," he says. "Guys have different triggers for timing, and my timing is very simple." As a boy growing up in wintry St. Paul, Mauer pounded balls into a tarpaulin hung in the family garage. His father, Jake Jr., a salesman for a company that designs trophies, rigged up a contraption that would drop the balls through a coffee-can-and-PVC-pipe device, leaving time only for a quick, short stroke. By the time Mauer was a senior at Cretin-Derham Hall in St. Paul, his swing was so pure that he made contact nearly every time he swung (he, in fact, struck out only once in high school), though with little power at first.

"My coach, Jim O'Neill, took me out for batting practice one time," Mauer says. "He would just throw and pepper certain spots. And that's when we found out that middle in or middle a little up was my spot. I was consistently hitting balls over the fence.

"So after we were done, all he said was, 'Why don't you look in that spot the next couple of games?' I think I hit seven home runs in the next seven games. I took that and ran with it, not just for hitting home runs but hitting good pitches."

Mauer has grown into such a finicky hitter that he has swung at only nine first pitches in 202 plate appearances this year. He stands at the plate taking mental measurements of how the baseball behaves out of a pitcher's hand. "I just try to see how the ball moves, especially my first at bat," he says. "I always like to see a couple of pitches before I offer at one. I think ever since I can remember I've always felt pretty comfortable with two strikes."

With each strike pitchers jackhammer away at a hitter's leverage. It doesn't work as well with Mauer. Through Sunday, the average major league hitter this year had hit .186 in two-strike counts. Mauer had hit .253 in such spots. "When I get two strikes," he says, "I widen [my stance] a little bit and stay shorter to the ball. When things go bad, I joke with my coaches, 'I'm just going to go straight to my two-strike approach' because I'm comfortable with it. I don't like to get in that situation, but if I do get there, I don't panic or anything."

I have nothing to add to that. It's too bad I don't get any of their games, it would be fun to watch.
on June 26, 2009 No comments:
Email ThisBlogThis!Share to TwitterShare to FacebookShare to Pinterest
Labels: Baseball, Blog, Blogging, Commentary, Sports, Sports Media

The Mystery of Rennes-le-Chateau

Some worthwhile reading for you:

At the end of the 19th century, Bérenger Saunière, the poor parish priest of Rennes-le-Château, all of a sudden started spending a lot more money then he could ever have earned performing his normal duties. He had been assigned to this tiny village in the south of France at the age of 33 and had spent his first few years there in piety and poverty. According to his meticulously kept accounting books, in February 1892 he had a debt of 105 francs and 80,65 francs in his ‘fonds secrets’ (savings). That all changed in the 1890s. From that time on, his surviving papers and accounts record a total expenditure of some 660.000 francs, equivalent to EUR 2.500.000 today. He would spend up to 50.000 francs in one month in some periods. His salary as a priest was 900 francs per annum. Towards the end of his life he seems to have had some difficulty paying his bills but weeks before his death he appears to have been making plans once again. Saunière’s financial difficulties coincide largely with the World War I, an indication he couldn’t reach his funds abroad?

It’s often said Saunière got his fortune by mass trafficking: receiving money for masses he never said. There’s clear evidence that he was guilty of this practice, like so many of his colleagues at the time. However, the amounts of money he spent are in no relation to his illegal income from this practice. Detailed analysis of his records has taught he received 110.000 requests to say mass, which is a lot more than he ever could have said when you think a priest could say 3 masses in one day (and didn’t hold sermons every day of course). The going rate for a mass was 1 franc around 1880, increasing up to 1,5 francs at the time of his death. From this he could have earned no more than some 150.000 francs which only accounts for less than a quarter of his recorded spenditure (which was only part of what he really spent).

And it goes on from there.

At this wonderful site, you can read the collected works of the people who have been researching this mystery and find everything you will need to become well-informed about the subject. This is an excellent example of what can happen when people come together and blog about a specific subject. I don't do that here because, well, hello? It's just me, and I'm not that well-rounded. Plus, I'm hell to get along with.
on June 11, 2009 No comments:
Email ThisBlogThis!Share to TwitterShare to FacebookShare to Pinterest
Labels: Editorial, Post, Research, Science, Spending, Technology
Newer Posts Older Posts Home
Subscribe to: Posts (Atom)